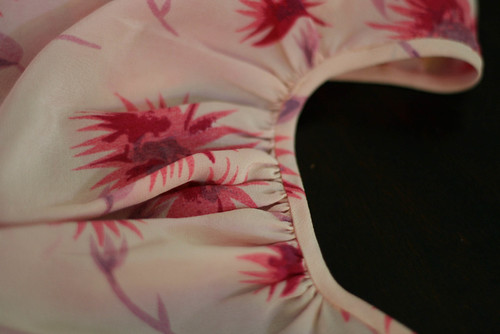 I’m a little obsessed lately with very simple vintage blouses. You know the type: they’re from the 1940s, have cap sleeves, and they button up the back. I have several old patterns and I’ve been collecting all sorts of vintage novelty prints to make them in (but not much time to make them).

I was making this one up in this rather loud pink silk I’ve had sitting around for a while. I had jut enough to make this blouse and the frugal side of me really gets a thrill out of that. I love being able to throw the scraps away after sewing and not feel bad about it.

The pattern called for finishing the neckline with bias tape, so I made some just like in the bias tape tutorial. But I had some bias tape leftover, so I thought it would be cute to make some bows. 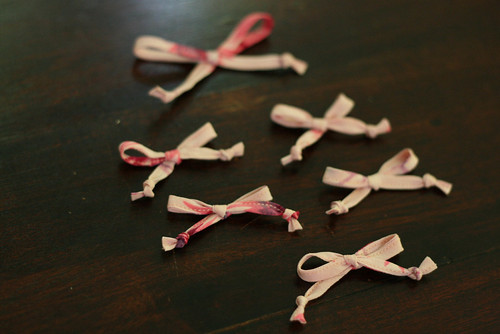 These are very easy to make. Just take your bias tape, fold in half,press, and stitch close the the edge. Cut it into short lengths and tie them in bows. To finish the ends of the bows, I tied the raw ends into knots and trimmed the excess. I got this idea from some bows on a vintage dress, and I really love the way it looks. 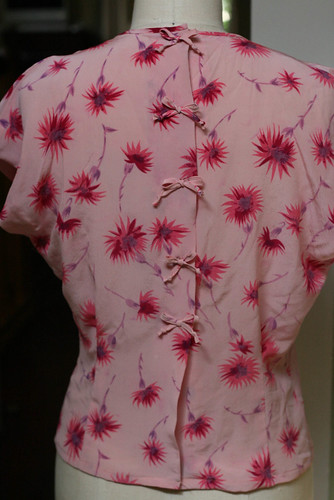 I placed one bow at the throat, and the rest down the back! I just sewed in snaps rather than buttons, and sewed the bows on the outside at each snap. I think this is a very sweet alternative to proper buttons!

That looks amazing. I am secretly hoping you’ll come out with a beautiful vintage-y blouse pattern in your next line…

Beautiful, I cannot wait to try this.

I love this idea!!! Bravo for sewing with *just enough* fabric too–I always love that feeling of having used all my fabric and not have anything for the scrap basket. ;) hehe!

I have to tell you, after seeing all the great things you’ve been doing with bias tape, I went out yesterday and bought myself a bias tape maker. I got a 1/4″ size (I really wanted 1/2″, but JoAnns didn’t carry that size’; so I think I’ll look on Ebay), and can’t wait to test it out! :D

i’ve been bias tape obsessed lately. i’ve been making tons and tons of spaghetti strap stuff for embellishment purposes, so i love these little bows. so cute!

i can’t believe that i didn’t see this post until now. i love the little, delicate bow ties. Lately i have been interested in vintage blouses too. i love silk and need to just start wearing it!

I love this! Bows are my favorite accessory. Like Casey, I’m thinking I might have to take the jump to start making my own bias tape when I making things from vintage patterns, it’s amazing what you’ve done!

Very nice! I love it when garments have interesting detail on the back. It’s one of the main things that separates handmade garments from expense-cutting mass manufactured garments, isn’t it? I also agredd with trying to use an entire piece of fabric, you’re post has made me realise that I always sunconciously try and marry up a pattern with a piece of fabric the exact length! I also agree with the other comment, I think if you created a vinatge looking blouse pattern (especially one that worked well with your skirt pattern) I think it would be a tremendous success. I for one would snap it up in an instant. Happy sewing x

Pretty! I’m with Emma on the pattern request.

Thanks for the feedback and especially pattern request! It’s definitely on my radar, since I’d like to do a pattern that’s suitable for a true beginner and this type of blouse can be very very easy depending on the details.

What a lovely idea! I adore these little details that make a garment special.

Oh lat looks absolutely gorgeous. But isn’t it a bit tricky to out on and button up behind your back? I’d totally wear this if the fastenings were at the front.

Oh that looks absolutely gorgeous. But isn’t it a bit tricky to out on and button up behind your back? I’d totally wear this if the fastenings were at the front.

It’s a little bit tricky I guess, but the blouse is loose enough that you can finagle it. The only ones that are tricky are in the middle, and because the blouse is loose, you can sort of pull them upwards to button or snap them, if that makes sense. :)

That’s really pretty! I usually tend to not like loud pink (except for my recent affair with polka dots) but this blouse works with it nicely. It makes sense to me, I have to finagle almost all of my vintage stuff anyways.

That is a very cute, and feminine, idea!! Love it! My question is, I am absolutely hopeless at making bows that lie flat. Do you think you could include (maybe on your blog if I haven’t just missed it) a step-by-step on how to tie a bow that lies flat and looks nice? Such a simple thing that somehow has eluded my crafting/sewing abilities!!
Thanks!

There is visibly a lot to know about this. I assume you made certain good points in features also.